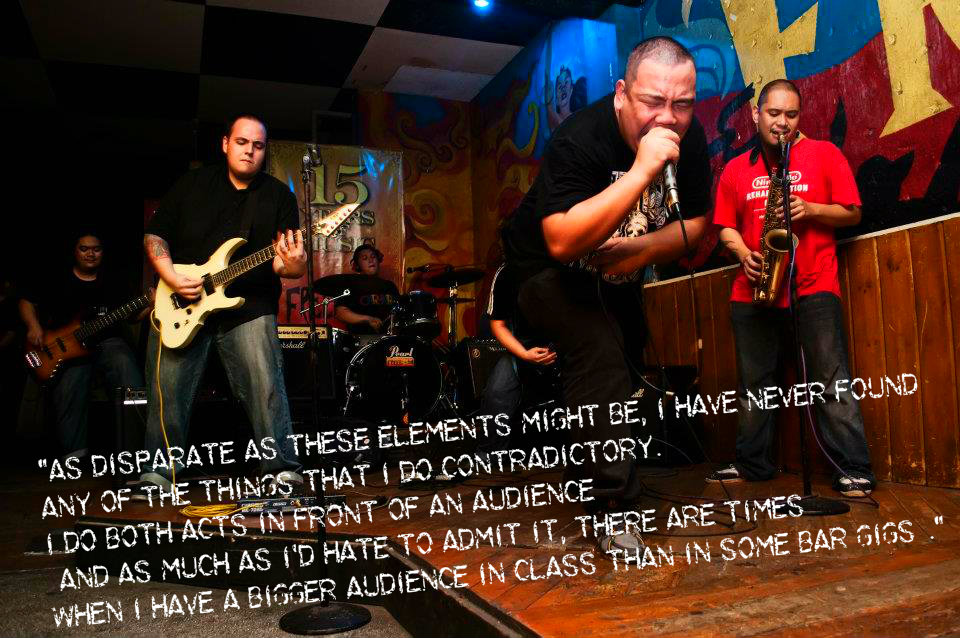 Olaguera with his band, COG. (Courtesy of Nico Servando)

These were the words Rogel Africa, vocalist of local metalcore band, Valley of Chrome, said before I first witnessed them play their Iron Maiden-esque metal anthem, “Forever Young.” This was back in 2001 at a small gig in Freedom Bar Anonas that included mismatched sets of bands like Valley of Chrome, my own band COG, and a Smiths-worshipping band that everyone would later know as Orange and Lemons.

I was in my early twenties and I found Africa’s spiel funny. The image of the aging metal fan was an odd one. I knew very few older metalheads back then. Most people outgrow it and I knew only a handful that seemed to have aged gracefully. It never occurred to me that I would eventually be one of them.

13 years later, I’m right in the middle of my thirties, still screaming my head off and stomping around the stages of shitty clubs. I’m still in the same band that I was in back in 2001. While some members have moved on to pursue other things, we’re still writing and recording songs for our next release. As for outgrowing the music, I listen to Slayer more than ever.

Playing metal weekend warrior hasn’t been my whole story for the last decade-plus though. When I’m not moonlighting as a rockstar, I’ve been engaged in a profession few would imagine possible for a metalhead — I have been teaching English as second language (ESL/EFL) on and off for almost the same time. I’ve also been teaching at the language center of Ateneo de Manila University for the past five years. I get perplexed reactions from students and teachers when they find out about my extracurricular activities.

In many ways, who I am onstage and the person I am when I’m teaching are polar opposites of each other. I’ve never been one to crack jokes onstage and I’ve always taken the band a bit more seriously than I should have. I also just might be the most humorless frontman in the industry. The goal for live gigs has always been to intimidate, mostly because the ferocity and aggression of our music doesn’t itself very well to other kinds of emotions.

These aren’t the kinds of things that make for an effective teacher though, especially if you’re teaching English to students who aren’t native to it. No amount of rage can coax a student to learn how to conjugate verbs. To keep my audience, I’ve not only had to be funny but I’ve even learned to make fun of myself as a way to keep attention spans longer.

In the past, I’ve found it necessary to keep the metal part of my life neatly compartmentalized. At times, I’ve gotten tired of trying to explain myself.

But I’ve found myself saying, “Yes, kind of like that,” because nobody understands when I say, “No, more like Mastodon.”

Sadly, being a part of the metal community means that you have to deal with the negative stereotypes attached to the music. Yes, metal songs occasionally – OK, fine, usually – talk about violence, gore, Satanism, and various permutations of those elements; but movies have those things too and so do many books. I have never had the urge to smash anyone’s face no matter how many times I’ve listened to Cannibal Corpse. I’d even argue that listening to metal has helped me release whatever violent tendencies I had during my younger days.

It’s true however that metal has been blamed for some unsavory events. Some of these were unjustified (Columbine) while some are — Varg Vikerness and the Norwegian black metal scene were implicated in various church burnings and deaths in the 90s.

The fact that many of my students are priests and nuns makes me feel like it’s necessary to keep that part of me tucked away sometimes. There are times when some of them get it though. I once talked at length about Megadeth with a Korean priest.

Two Sides of the Same Coin

As disparate as these elements might be, I have never found any of the things I do contradictory. I do both acts in front of an audience (and as much as I’d hate to admit it, there are times when I have a bigger audience in class than in some bar gigs). I also think of both aspects as characters that I play — the real me is neither that angry nor that funny.

Over the years, I’ve found that metal doesn’t really belong to the youth anymore. I’ve taught hundreds of college kids and only one recognized the Slayer slip-ons that I occasionally used to wear in class (Yes, I have since become that guy). I’m the dude in his mid-thirties who still needs to listen to Slayer to keep himself sane. It doesn’t seem so weird anymore though. It’s something that I’ve grown very comfortable with.