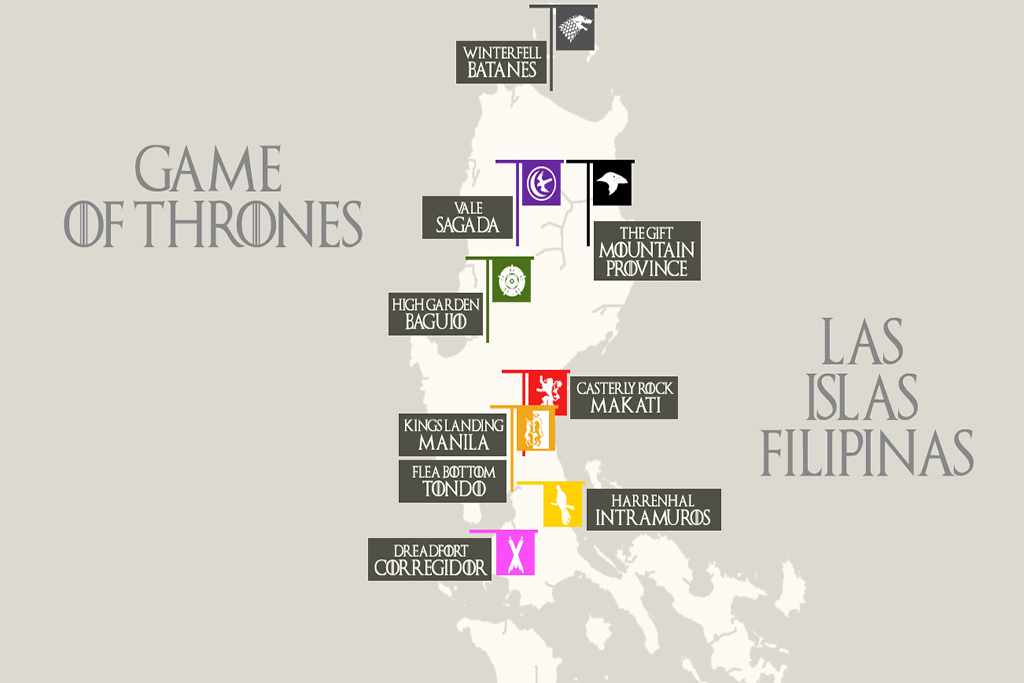 Summer means fans all over the world are stoked to see the latest season of Game of Thrones. But really, here in the Philippines, you don’t have to wait for the HBO series to experience life in the Seven Kingdoms. If you use a bit of your imagination, you’d realize that the country is every bit as dramatic, interesting, and action-packed as Westeros. We reached out to several of the most hardcore Game of Thrones fans we know and asked them to chime in. What follows is our very own map of the Seven Kingdoms, Pinoy-style.

Winterfell is the seat of power in the North, ruled by the ill-fated Starks. Its lush, forested fields are a sight to behold—but beware. As the Starks’ somber motto warns,—“Winter is coming”—the cold can be unforgiving. In the Philippines, Batanes is a nature paradise that many travelers dream of visiting. With its pristine beaches, secret Fountain of Youth,  forests, and charming ruins, Batanes is definitely worth braving storms for. And similar to House Stark founder and First Men descendant Bran the Builder, local hero Datu Aman Dangat also fought for indigenous rights and freedom.

One of the largest cities in Westeros is Oldtown. Considered as the oldest city in the Seven Kingdoms, Oldtown hosts the Citadel, aka Maester HQ: it’s an academic hotspot where the Kingdom’s wisest men earn their PhDs. Cebu, a port city that figured prominently in our colonial history, boasts of a good economy and some of the best universities in the country, just like Oldtown.

The Riverlands, the turf of the Tullys, sits on the bank of Westeros’ mighty rivers. While the Boracay comparison seems ridiculous, the Red Wedding, aka the bloody event that will haunt many GoT fans forever and ever, ties it all together: Let’s just say the Riverlands is where parties-ehem, LaBoracay-end badly.

The Vale is Sagada

Ruled by House Arryn from the Eyrie, the Vale is a mountainous region occasionally upset by harsh winters. Its land, however, is fertile and thus, great for farming crops. Thinking of the Vale, only one place comes to mind: Sagada in Mountain Province. The best produce in the country comes from the Rice Terraces; like the Vale’s hill tribes, the Igorot community has been preserved; Sky Cells? Well, how about Hanging Coffins?; Mt. Kiltepan Tower is basically the Eyrie’s Moon Door, where one can marvel at a peaceful sea of clouds. Or, you know, “accidentally” push pesky lovers to their death.

The poorest neighborhood in King’s Landing, Flea Bottom is reminiscent of Tondo. Like Flea Bottom, we know Tondo as a gritty place where only the toughest of the tough survive. Although Fleabottom is infamous for its crime, makeshift houses, and oddball residents, it’s a place that has produced notable men such as Ser Davos Seaworth and precious Barratheon bastard Gendry. Tondo, on the other hand, is the hometown of brave men such as Andres Bonifacio, Asiong Salonga, and Macario Sakay.

Located in the South, arid and mountainous Dorne is the hottest land in Westeros. Given its geographical characteristics, Dorne is also where the hottest Westerosi live (e.g., “Red Viper” Oberyn Martell and his daughters, the gorgeous Sand Snakes). So where in the Philippines is Dorne, a land where fierce warriors, libertines, and proud LGBTQs coexist? It’s no other than Davao. Notwithstanding Ramon Bautista’s hipon slur, plenty of attractive folks come from Davao, right? (Right?!) Despite its dry climate, Dorne has a thriving agriculture industry, mainly due to its exotic fruit production—erm, durian, anyone? Dorne is ruled by the unbowed, unbent, and unbroken House Martell, while Davao is ruled by the dauntless House Duterte. And if Dorne has the vengeful Prince Doran as its patriarch, Davao has the iron-fisted Rodrigo as its Mayor. He supports LGBTQ causes, says whatever is on his mind, and doesn’t take shit from anyone.

Home to Queen Margaery and other beautiful people, Highgarden is ruled by the fancy schmancy House Tyrell. It’s a place that boasts of lush gardens, dainty flute music, equestrian grounds, and sophisticated parties. Baguio, which hosts the annual Panagbenga Festival, gives off the same flowery, (vacation) home-away-from-home vibe. While we all know that the Philippine Military Academy is in Baguio, it’s a funny coincidence that the Tyrells of Highgarden proudly lead the biggest army in Westeros.

House Lannister’s seat of power Casterly Rock is the epitome of material wealth. The Lannisters’ castle is solidly built over a rock formation that has a maze of gold mines beneath it. It’s safe to say that Casterly Rock, like rich and urban Makati, is Westeros’ primary financial district. Not to mention, it’s also ruled by a very controversial family. Question is, who’s the Tyrion of House Binay?

King’s Landing, the capital of Westeros, houses the coveted Iron Throne. In the TV series, it’s currently occupied by King Tommen, the product of Jamie and Cersei Lannister’s incest. In the Philippines, the Iron Throne is currently occupied by Benigno of House Aquino, Third of His Name. There’s no doubt that King’s Landing is Manila: The Red Keep is Malacanang Palace; the Great Sept of Baelor is the Manila Cathedral; Fleabottom is Tondo; the City Watch/Goldcloaks is the MMDA; and Blackwater Bay is Manila Bay. Like Manila, King’s Landing has seen its fair share of battles that left the city in ruins.

The Dreadfort is Corregidor Island

No place in the Seven Kingdoms is as creepy as the Dreadfort, the seat of House Bolton. The Boltons are believed to hang the flayed skins of their enemies on the castle walls. It’s no secret that there are torture chambers in the Dreadfort as well. Due to its bloody and battle-worn history, the island fortress of Corregidor easily brings the Dreadfort to mind.

Back in the day, Harrenhal was the greatest fortress in Westeros. King Harren had thick walls built around the castle in order to ward off dragons. It was a major failure, as the dragons simply flew over the walls and burned him and his family alive. The castle soon fell into ruin. Harrenhal should surely remind you of the walled city of Intramuros, even if it’s now a popular field trip destination.

The Iron Islands is the Sulu Archipelago

Home to the seafaring Ironborn, the Iron Islands is a cluster of small, bleak islands that really doesn’t have much going for it, save for its maritime-savvy people. Geographically speaking, the Sulu Archipelago, which is composed of Basilan, Jolo, Tawi-Tawi, and other lesser-known islands, resembles the turf of House Greyjoy-plus, Sulu has its own Ironborn, too: the Bajau and Sama people.

Beyond the Wall is the Spratly Islands

Only because our own Night’s Watch keeps close tabs on the Spratly Islands. That the Chinese are Mance Rayder-ing it up in the Spratlys only makes this comparison more spot on.

Surrounded by thick walls and plenty of guardsmen, White Harbor is a port city ruled by the Manderlys, a family that uses a merman as their sigil. White Harbor seems like an ideal place to live in-incredible seafood, close to the ocean, orderly, and safe. White Harbor is like Palawan, which is considered as the safest place in the Philippines.

The Kingsroad is EDSA

The Kingsroad is the longest highway in the Seven Kingdoms, making it the most convenient way to travel from place to place via horseback. Without a doubt, EDSA is the Philippines’ Kingsroad, where GoT-esque drama (road rage incidents, MRT failure, burning buses) unfolds on a day-to-day basis.

Think another place belongs in this map? Let us know in the comments!