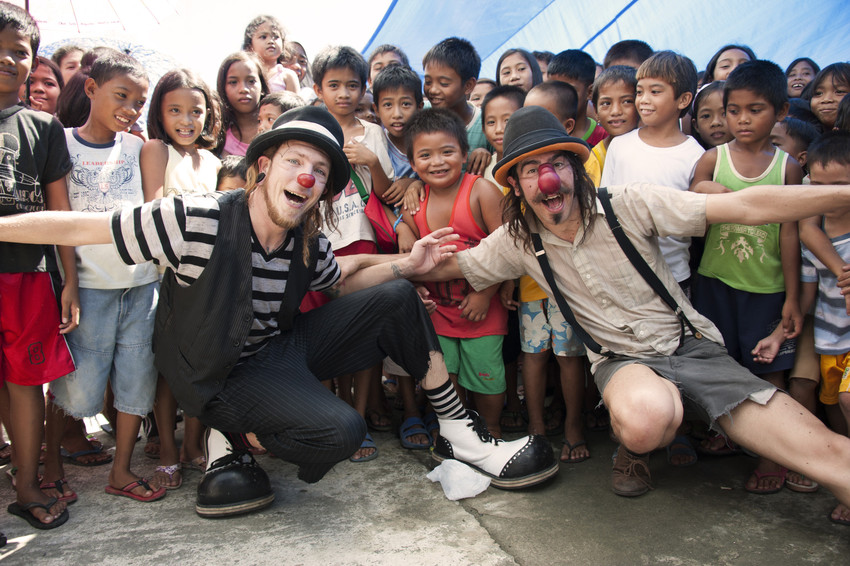 Remember your childhood? Some of us might remember birthday parties when there were magicians pulling rabbits out of hats, mascots dancing to a medley of songs, or clowns winning us over with balloon animals.

Now, try to imagine it a little differently: your childhood being swept away — not by fairy tales — but with a super typhoon that erased your town and took away your innocence. All the moments you valued as a child are now gone, buried in mud. These are the lives of the children who survived Typhoon Yolanda, whose young years have been turned upside down with disaster. Just how can these children go on with their lives and grow up normally after such a horrific event?

This is the question that a lot of non-profit organizations struggle with each day. For Plan International, an NGO operating in over 50 countries, solutions mean more than just the usual aid and shelter. In fact, Plan has taken a unique approach in its efforts to help rebuild the lives of those affected by Yolanda. While Plan’s main goal is to improve the situations of young victims of natural and man-made disasters, it also introduces a new element to aid and recovery: laughter.

“Children were really psychologically damaged after the typhoon and you can understand that adults can rationalize that this is a natural disaster after it’s over. But children, they can’t really process it,” said Lotte Claessens, Plan’s Emergency Child Protection Advisor. Claessens added that the children even thought that the world was about to end during Yolanda, especially when they saw “whirlpools of water with people in it.”

“We realized that it was more needed for children to bring back normalcy in their lives. After the typhoon, they didn’t go to school, they weren’t able to see their friends in a normal setting, and there were very limited safe areas for children to play in,” said Claessens.

The universal healing language of laughter

Aside from the many basic necessities Plan has already given and continues to give the victims of Yolanda, Plan brought in Clowns Without Borders (CWB), a group of professional globetrotting clowns who wish to bring laughter to children who need it most. Like their medical counterpart, Doctors Without Borders, these red-nosed entertainers heal, but in the form of laughter. The clowns visited 26 towns in Samar and Leyte twice: during the Christmas holidays and on February 6 to 8. Claessens added that clowns were able to reach over 13,000 children in Yolanda-struck areas.

“What these clowns can do, in those performances, they touch upon emotions that children have: like feeling of loss, grief, anxiety, and fear, but they do it in a funny way and they make it lighter. It’s an expression of how they feel but it’s made more bearable for the children.”

One will be surprised at how much the clowns can make the lives of these children a little better, one skit at a time. Claessens describes that the enthusiasm of the children was evident right after the first few performances. It was like a scene from a huge birthday party, but every child was the celebrant.

“That’s a very important part of what the clowns can do in terms of managing the stress levels of children. It makes them forget their worries, it makes them shift their attention from all the concerns they might have to just being a child and that’s the most important thing for a child’s well-being,” added Claessens.

Aside from the kids in Samar and Tacloban, the clowns have also visited children in Ecuador, Colombia, Myanmar, Mexico, and plan to revisit Haiti in March. CWB was founded in Barcelona in 1993 after one professional clown, Tortell Poltrona, performed in a refugee camp in Croatia. A realization came quickly after: entertainment for children is deeply needed in crisis-struck areas. Now operating in nine countries with clowns coming from areas such as Belgium, Canada, and the United States, CWB coordinates with various organizations so they can heal with laughter in places they’re needed most.

“The body language of the clowns and the jokes they make are understood, even if the children and the clowns don’t speak the same language. I think the creative ways they use: the theater, dance, music, are all very universal. Children understand it immediately. When the performance started, they were completely enthusiastic and didn’t want the clowns to leave. Even after the performances, the children were playing with the clowns in smaller groups so the clowns were also able to give the children individual attention,” said Claessens.

But how can Plan ensure that the positive impact of these clowns will last longer?

During the clowns’ recent trip in early February, the clowns trained with teens and adults involved in the “child-friendly spaces” program, so the “chain of laughter” will never end.  Plan came up with the idea to link the clowns to the trainings for three days, so they can share some of the skills that the international clowns have. They hope that through this they can sustain the positive impact the clowns have given on the children.

Aside from training, Plan has been creating child-friendly spaces in over 100 towns and municipalities across Samar and Leyte. These spaces allow children to be themselves with the goal of managing stress and emotional levels. In these spaces, the kids work with experts in structured psychosocial sessions where they talk about certain themes that are important while growing up, such as their emotions, dealing with others, and rebuilding their confidence. These spaces also accommodate health experts to ensure hygiene in areas surrounded by dirt and destruction. Plan also trains local workers and teachers to identify which children have higher levels of stress.

“All the children have certain levels of stress, but some children have it more and might develop mental health problems. So we use the spaces as a central place in the community to identify more vulnerable children,” said Claessens.

More importantly, literacy and numeracy are also practiced since most schools were ruined by Yolanda.

Ultimately, Plan International hopes that their efforts can help children have a chance at a better childhood. Nothing can undo the destruction they’ve already endured, but through the clowns, the kids might one day be able to recall their childhood and also mention, “remember those clowns that made us laugh, even for a little bit?”