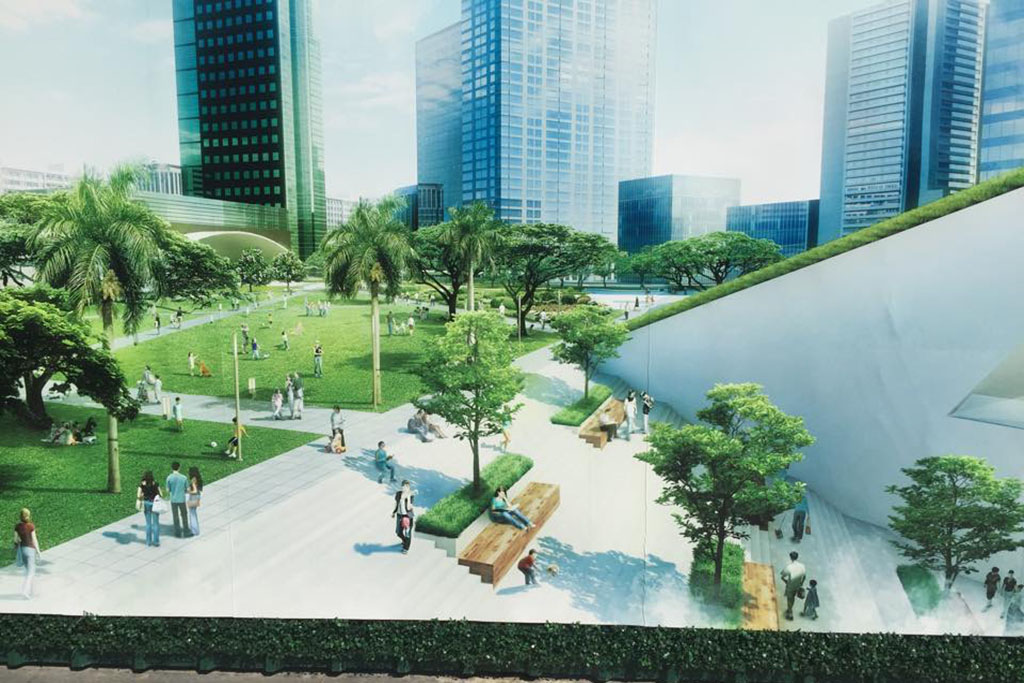 “It seems to me that if New York were governed by Filipino politicians, Central Park would be full of condos and malls in only a decade.”

Those were the observations published on Interaksyon earlier this month by Jorge Mojarro, a Spanish doctorate student, on his outlook toward Filipinos and our relationship with open spaces. As it turns out, we may be ahead of schedule.

The recent cordoning off of a large section of the Ayala Triangle Gardens in the heart of Makati’s business district has provoked strong reactions from citizens who are sad to see it go.

The Triangle Gardens is one of the last big green spaces left not just in Makati, but in Metro Manila. Since the park was opened to the public, it has grown to become a popular hub for people who work and live in the area. The large swaths of greenery have attracted hundreds of joggers and fitness enthusiasts. Among some of the things one can see in a typical weekday at the park: frisbee games, soccer clinics, zumba classes, and a smattering of picnics and get-togethers.

But with over 20,000 square meters of space, the Ayala Triangle is also one of the most valuable properties in Makati. Set to rise on the northern half of the park is what Ayala Corporation has described as “an iconic mixed-use development right at the center of the city.” Featuring an office tower, a luxury hotel, and more retail spaces, Ayala has branded this as part of the company’s “commitment to constantly enhance its communities to ensure these remain relevant throughout many generations.”

The project promises “an enhanced pedestrian experience through additional civic spaces, a sunken plaza, and special events area that will be fully integrated with the existing ATG, its courtyard, and restaurant strip.”

The plans for the development were revealed as early as 2009, but the recent start of activity on the site has brought the issue to the forefront.

Many of those who are sad to see it go also point out that the park is still private property and that the developers have every right to build as they please.

Still, numerous park lovers could not help but express their disappointment. In a widely shared opinion piece for the Philippine Daily Inquirer, Julia Holz, an American who has lived in the Philippines for the last 35 years, writes of her thoughts on development:

A few days ago, I was shocked to see most of Ayala Triangle (formerly Ugarte Field) blocked to pedestrians.  All the joggers, badminton players, dog walkers, moms with strollers, fitness and yoga practitioners, and nature lovers have been deprived in one fell swoop of the last mature green area in Makati for what Ayala claims will be “an iconic office tower, luxury hotel, fresh dining and retail choices and an open space.

In true internet fashion, people have also taken to creatively producing their own renderings of the development.

Over at Twitter, the company has been quick to respond to any fears over the development of the park.

@cagsyy we love Ayala Triangle as much as you do that’s why with the new plans, we are actually increasing the useable greens/open spaces

And like most controversies, there are those who point out that we have bigger problems to deal with.

My opinion about Ayala Triangle. Losing green space in Makati? Sorry. I don’t give a shit. Find someone else. Sigh… I…

A Filipina is one of the most hated women in Korea

In just one minute, see how Filipina beauty has changed throughout the years

The Philippines is the first country to legalize Uber

After decades of neglect, the iconic Metropolitan Theater may finally be restored

In just one minute, see how Filipina beauty has changed throughout the years