In predominantly Catholic Philippines, “extracurricular relationships” are frowned upon by society. At a young age, Filipinos are taught to be loyal to their partners. The Philippines is also the only country in the world, aside from the Vatican, that doesn’t permit divorce.

Interestingly, teleseryes and movies about adultery are popular among Filipinos. It seems there’s a niche audience for catfights between wives and other women, for trysts between married men and their special friends.

Enter AshleyMadison.com. It’s a dating site that encourages attached males and females to have affairs. Its catchphrase is “Life is short. Have an affair.”

A local version of the website was launched last week, prompting the Department of Justice to seek a ban on the dating site.

“The website is a platform that allows illegal acts to be eventually committed. A ban may be enforced,” DOJ Secretary Leila de Lima told Agence France-Presse.

RELATED: From a theology professor to a drunk date: stories of Tinder in the Philippines

RELATED: 8 reasons why you should be on Tinder even if you’re not looking to date

How does it work?

Compared to the smoothness of Tinder, Grindr, and OKCupid, the most popular dating platforms today, Ashley Madison feels a bit like Friendster and Multiply circa 2002—clunky, lots of clicks, and not quite as polished.

But signing up for Ashley Madison is like signing up for most social networks. Unlike social networking sites though, Ashley Madison lets you list down your “intimate desires.” The options range from Cuddling & Hugging to Bubble Bath for 2 to Experimenting with Tantric Sex.  Whatever that is. Aside from laying down what kinds of encounters you are open to, you can also flesh out your ideal partner by filling out the “My Perfect Match” tab. Do you want somebody who’s tall, dark, and handsome? A sugar daddy? A bad boy? How about someone with good personal hygiene?

RELATED: I am an illegitimate child and I am never ashamed of being one

RELATED: What taxi drivers have taught me about life

While creating an account is the same for both sexes, I discovered that using Ashley Madison is more favorable for women.

I set up leslie00123’s profile, a 29-year-old woman who is looking for a well-groomed professional to “add fun to her marriage.” She is of average height, weight, and built. She’s brown-eyed and black-haired. She likes spending her time on cookouts, playing sports, and singing karaoke. Her intimate desires are gentleness, and, as a reverse-nod to “50 Shades,” being the dominant/master in the relationship. She likes men who are creative and adventurous.

For leslie00123’s profile picture, I used the composite image of the average Filipina face. And to simulate an air of mystery, I put a mask over her eyes; Ashley Madison lets you choose from masks, or just a black strip. 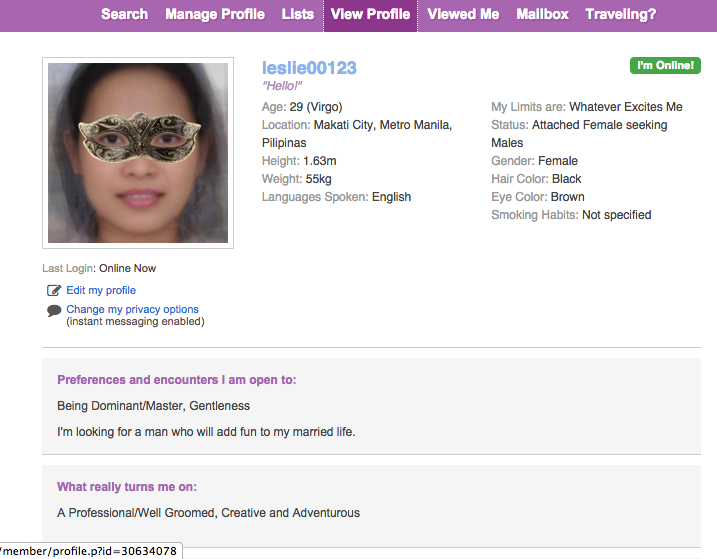 When everything was done, I clicked Search.

Search is where you can find “attached males seeking females.” Like Tinder, you can refine your search according to age and location, and you can even narrow it down to the last time they went online.

Judging from their profiles, I say most of the men in Ashley Madison want to keep their intentions vague. Not only do most men choose to cover their faces, but also, their limits are usually either “Whatever excites me” or “Anything goes,” answers that don’t really tell you anything.

Even in a site that encourages you to have an affair because life is short, men are afraid of being found out. Save for a few, anonymity is preferred and no one gets too specific. It’s as if these men joined the site with a hand over their eyes, but with just enough gaps between their fingers to see what they’re getting into.

RELATED: The bitchosness of gay dating

To be Admired is to be placed under one’s favorite profiles. A Wink, on the other hand, is as obscure as a Facebook Poke. What follows a Poke? Or in this case a Wink? Is Winking back too suggestive?

Perhaps it’s better to send them a Gift, a nice, harmless gesture. As a woman, you can send gifts to men for free. You can either send them a cherry or a martini. But the gifts you send must come with a message. For instance, if you want to send a martini, you can only choose from these three messages, all of which sound like taglines for B-movies featuring sexy starlets: A little something to wet our appetite; Seduction is all in the way you shake me up; and 2 martinis + 2 hot people = one memorable experience. Not much choice there.

I sent Hi’s to a couple of men who were online, but only a few responded with messages. The response of choice seems to be the ambiguous Wink. Chatting on Ashley Madison takes time. Facebook’s “Seen By” feature informs you that the other person has received your message, but the cheating site keeps you anxious for a reply. Just like in a real affair, I suppose.

Private Showcase: For your eyes only

Another distinctive feature of Ashley Madison is the Private Showcase, a picture that invites you to start a conversation with someone. To view a Private Showcase, you have to be granted access to it by being sent a key.

Leslie00123 was allowed to view three Private Showcase’s: two selfies from a 30-year-old occasional smoker; an eye-covered selfie from a 36-year-old Leo who’s looking for no-strings fun; and, the one that takes the cake, the epitome of internet sleaze—a low-res dick pic from a certain 36-year-old from Quezon City.

I sent the 36-year-old Leo a message. I won’t disclose his username here, but to give you a better idea of his personality, he joined the site for a short-term fling and he’s on the lookout for “milfs, hot mommas, and adventurous babes.”

leslie00123: hi. have you already met anyone from the site in person?

Leo: none yet. hopefully youll be the first. email me at [his email address]

Leo: nope. sorry. need your mobile number first and see from there

And that was it. I probably sent the wrong reply. Talking to people on the site can be frustrating because continuous conversations are rare. But for men, joining the site might be even more of a pain in the ass.

The men of Madison

If Tinder were the college party where everyone was welcome to crash, Ashley Madison is very much the strip club, or Timezone, whichever is more familiar, of websites—you can look, but every interaction comes with a price.

Another staffer created a fake account. Posing as a 34-year-old attached male seeking female, and using the composite image of the Filipino face, he quickly tried to navigate the site and tried to replicate some of the interactions that leslie00123 experienced. It didn’t go quite as well.

That cute “attached female seeking males” from Parañaque? If you want to message her, that will cost you five credits, which, depending on your membership package, a credit can cost anywhere from Php 16.40 to Php 32.99. Now if that doesn’t sound like much, consider that Ashley Madison only sells credits in bundles of 100, 500, and 1000 credits.

For complete discreetness, the site also gives you peace of mind by promising that credit card statements will not read “Ashley Madison.”

The option to chat, which seemed straightforward for leslie00123, was also available to the male profile, but for a price. It would cost 30 credits for 30 minutes. That’s almost a thousand pesos at the lowest membership package.

Even when females initiated a chat or sent a message, the male profile would only be able to access the message after buying and using credits.

It seems as though chivalry isn’t dead, even for extramarital online affairs.

Will it catch on?

Ashley Madison now boasts over 2,500 profiles in the Philippines. While most of the profiles I encountered across the site weren’t active—hundreds did not have a photo, or any other information filled up—there are legitimate individuals who are looking to meet others in the site.

At its core, Ashley Madison is pretty much the same as any other dating site, with the exception of being able to identify yourself as “attached.” Does it promote affairs more than any other dating site? It certainly can, but a lot of the profiles on the site also identified themselves as singles.

Perhaps the tagline “Ang buhay ay maikli. Mangaliwa,” oversells it a bit. Anyone looking for an affair could just as easily log on to any other dating site. After all, there is a study that shows that cheaters are more likely to cheat again.

Chances are, Ashley Madison isn’t the problem. Your spouse is.