The FX approaches the North Avenue MRT Station. There is heavy traffic and of course, this is never a good omen. I lean forward and through the windshield I peek at the footbridge connecting TriNoma and the station. I sigh when I see the silhouette of bodies across the bridge lined up in single file. It isn’t even Monday, I think to myself, but then I remember the news I read while I was in Bangkok: Only seven trains are functioning now. We are let off the FX. Trying not to groan, I find my place at the end of the left-side queue.

The smell is repulsive and the sun burns my skin. It’s June, but the summer shows no signs of ending. When will the heat give way to cooler temperatures? I run my hand across my forehead to wipe off sweat and dab my wet hand on the backside of my jeans. What terrible timing to forget a handkerchief and umbrella. I notice that I’m not alone in that regard: people around me are shading their eyes with their hands, some with their backpacks.

We are all at wits end, but we fall in line anyway, because honestly, what better options are there?

The end of the line continues to fall farther away from the station’s entrance, past Sogo and toward the construction site beside the hotel. It’s not as bad as last year though, when the lines would stretch past Landmark. I suddenly remember the photoshopped image that went viral at the time, the one showing people lined up at Sogo instead of the MRT. It was funny. I smile to myself.

At last, we are advancing. As soon as the guards let us through, people rush in without rhyme or reason. More lines pop up, which is ridiculous because this simply creates a bottleneck situation at the guards’ baggage checkpoint. Once again, the Filipino “Me First!” attitude is on overdrive.

Once past the guards, we stand shoulder to shoulder in the tight hallway leading to the escalator. Some people take as many steps forward as they possibly can in the tiny space that they have. I can feel someone’s bag on my back, but I suppose that’s better than someone’s breath on my neck. Others are glued to their screens—texting, surfing, and playing Clash of Clans, Candy Crush Soda Saga, or some other game I’ve never heard of. They look at you with murderous eyes when you accidently step on their heels because they walk too slowly.

Not surprisingly, the escalator is broken. 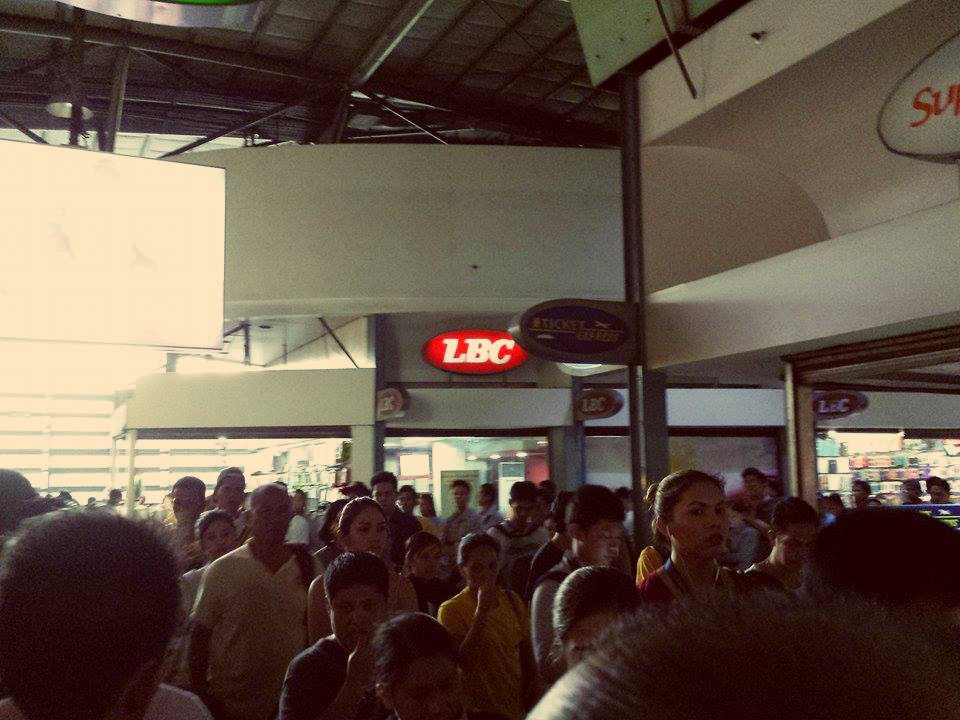 I have a stored value card, so that’s one less line to line up for. Only half of the gates are working, so there is yet another bottleneck situation.

I make my way onto the platform area and pick a spot. As a commuter for over two years, I’ve deduced that the best spots in the train carriages are the ones in the middle. For starters the aircon is stronger there. I also get more wiggle room than I typically would on the front or back ends of the carriage. Another reason to go for the middle is that when crowds of people rush into the train, I have the option to head left or right, depending on which side has more available space.

The train arrives, the doors open, and a wave of commuters step into the mobile can of sardines. I notice that there are no longer any seats available, so once I’m heading the queue, I stop and let the passengers who want to ride walk past me. This way, I’m first to step on the next train AND I have the sweet luxury of choosing where I want to sit. A few minutes later, the next train arrives. I find a seat at the sweet spot, and soon, I am southbound.

We arrive at Cubao station and obviously, the train is jam-packed by now. Yet there are still lots of people waiting to get on the train. The doors open and I hear people shout the standard “Lalabas muna, makikiraan!” and “Wag muna kayong papasok, may bababa!” People outside, however, don’t seem to comprehend these simple imperative sentences, and they shove their way in. In this flurry, there is an exchange of words, but somehow people get out and people get in.

The train stops at Shaw Boulevard. People come and go. This time, there is a confrontation. A man raises his voice, telling the guy behind him to stop shoving him. They exchange a few choice words, but the rest of us don’t give a damn. At this point, one should be prepared to be shoved and elbowed at the sides if he chooses to commute by train. Especially during the rush hours. The two men fall silent, and all that could be heard is the lull of the train as it cruises on the rusty tracks.

I feel the knees of the guy standing in front of me touching mine. I look at him for a second with a blank expression. It’s an incredibly uncomfortable invasion of personal space for a stranger’s knees to touch yours. But like I said, one should be prepared for the most awkward situations in the train. We look at each other briefly with silent understanding, seemingly having a telepathic conversation.

The train finally arrives at my stop, Ayala Station. Before the train even comes to a complete halt, many of us stand, eager to exit the train and line up for the last time. When the doors open, I squeeze my way past people blocking the way.

As I press the up button on the elevator, the train doors close. I’d like to think I’ve made it out alive, but I’d be kidding myself because I’m only halfway there. Later tonight, I’ll be embarking on the return journey. That is something I never look forward to.

I exit SM Makati and walk briskly through the station, dodging slow walkers and passersby coming from the opposite direction. I am eager to reach the gates, hoping that there isn’t a long line. Thankfully, there isn’t one. I rush through the gate and down the escalator, down the steps and onto the northbound platform. My bliss is short-lived when I see the zigzagging lines of commuters. I squeeze my way to my regular line, which places me in the optimal position inside the train.

The first train arrives. There is noticeable room inside, but when it stops people fight their way in and I am unable to board. I watch as people force their way in, preventing the doors from closing. A lady pushes the man in front of her. The doors close after several beeps and the train is on its way to about eight more stations before it becomes less crowded again. I am near the front of the line.

The second train arrives. It’s not as empty as the first train, but I’m too exhausted to wait for the next one. As the train slows, I pocket my phone and brace myself for the collective push.

Entering the train is a lot like surfing. You must first fight for good positioning, wait for the waves, and when the right one comes, paddle to get momentum and then just ride that baby to the coast.

Without much effort, apart from self-defense from elbow shots to the body, I ride the wave of people into the train.

I am in the middle area of the train, between the right-hand and left-hand doors. People flock to this spot, even if there’s plenty of space on the sides. This is the worst place to be in if you’re wearing white sneakers like I am. My white shoes now can be described as putim, and rightfully so, I BLAME THE SYSTEM.

Every five minutes we stop. And at each stop, I inch my way inside until finally, at Ortigas, I am standing in front of the seats. An attractive lady is seated in front of me. I notice she is getting the attention of fellow male commuters. Her top, which is quite loose to begin with, has probably been pulled down when she struggled to get to her seat. Her shirt is exposing a good portion of her cleavage. I tap her on the shoulder and gesture for her to pull her shirt up. She does so quite hastily, and mouths an inaudible thank you. I smile.

Finally, Cubao station nears. The Araneta Center comes into view. In a minute, I’m positive that I’ll finally get to sit down. The doors open and I expect the same thing to happen: People coming and going. Except it doesn’t. After most of the passengers are out, the attractive lady stands, says a proper thank you, and plants a kiss on my cheek before walking out. All I can say is, “Sure, take care.” I guess good deeds don’t go unrewarded, and my faith in the MRT and the government is restored.

I watch as she walks away. I want to go after her. Ask for her name, or her number, or even just her Facebook account. What if we could be friends, or more? What if she was the one?! The doors close yet again.

I will never know. The moment is lost.

The train arrives at North Avenue, and I hear the operator’s farewell monologue. People head out, many making a run for the gates. But I linger for a moment.

I made it. I’m drained of energy, but at least I’m close to home. It’s nothing new, given that I do this and will continue to do this everyday, but I savor the small victory.

Riding the MRT doesn’t seem all that bad once I have reached the final stop. That is, until the next morning, when I find myself in the same situation all over again.

Lessons on the road: my life as a student turned taxi driver

An honest conversation about the MRT

VP Binay is on a letter-sending spree

VP Binay is on a letter-sending spree

Watch how the Japanese clean their trains in only 7 minutes

Catch me if you can: The snatcher on the bus